To see the location of interesting places to visit, see our interactive map.

Coliseo Theatre is formed by 787 seats in one of the best place to promote the culture in Palma del Río. It was inaugurated in 2001 when the 18ª edition of south theatre fair took place. Coliseo Theatre offers cultural activities as performance, theatres, films or lively musical concerts. 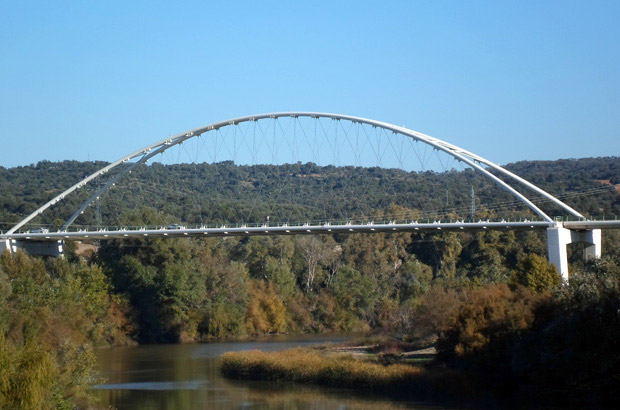 New bridge of the Guadalquivir River

New bridge of the Guadalquivir River

The second bridge above the Guadalquivir River is seen as a modernist symbol of our town and also an increasing economic development in recent years. This new bridge was inaugurated in January, 2018 connecting the road A-431 (Palma del Río to Córdoba) with A-453 (Palma del Río to Écija) this solves the traffic problem on the well-known “Puente de Hierro” iron Bridge due to its width and weight limitations. 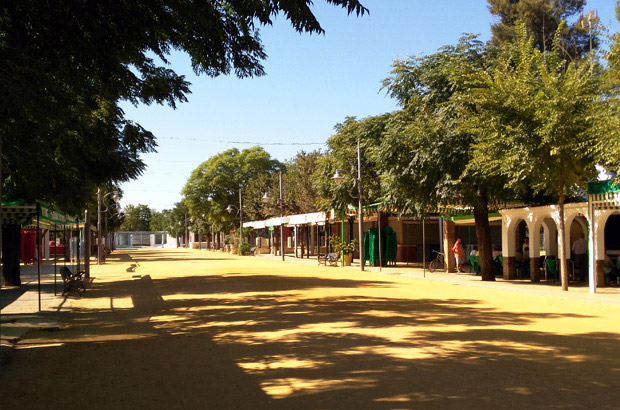 Ramirez de las Casas-Dezas wrote in 1842 “there is a poplar grove and an avenue from the town until the limit of the Genil River with three-lined streets formed by black poplars. One of these three streets (the middle street) was planted around 1760 and the others in 1829”.

Both the avenue and the garden combined are the perfect place for Palmeños especially in the summer. The avenue’s tree covered streets are enriched with many traditional foods stores with interior outdoor terraces. Throughout “El Mirador of the Genil River” Reina Victoria gardens which have been recently restored have recovered its original Versailles features, creating a formal style, symbolizing the moment of its creation.

Mirador of the Guadalquivir River

Mirador of the Guadalquivir River

It is placed near Belen Hermitage and it is one of the most privileged viewpoints to the Valley of Guadalquivir and of the bridges which cross the river. This is a wonderful view to see the beautiful town surrounded by two important rivers and orange trees plantations.

Mirador of the Genil River

Mirador of the Genil River

At the background of Paseo Alfonso XIII, you can see where the river begins its flow in this spectacular Mirador of the Genil River. This place offers you a vision of the economical activity, for example the flour factory “Harinera”. You could enjoy walking throughout “La Alameda del suizo” that is a eucalyptus area and “La Pasarela de San Francisco Javier”. This “Mirador” is the beginning of a path with a lot of white poplars, olms, ashes and willows.

It was the former place of water supply for the town in “La Rivera del Guadalquivir”. Its name is clearly connected to Dominican order of Santo Domingo convent. It was the traditional place where the women met in the past and a lot of legends have been told about this singular place. Subsequently, it fell into disuse and it was hidden under other constructions. After the latest renovations of the wall enclosure, a fountain was created to honour this special place.

It is in the south part of the wall. This arch was planned to improve the city centre due to the increasing number of people and merchants who had to enter to the town. Its name refers to Santa Clara’s convent which is attached to the arch.

They are two different facilities which are related to the production and transformation of wheat which increased after the Civil War around 1940. These two buildings, which fell into disuse, are preserved. The flour factory is placed in The Genil River near to “Mirador and Paseo Alfonso XIII and Silo” is placed near the train station on the right bank of the Guadalquivir. 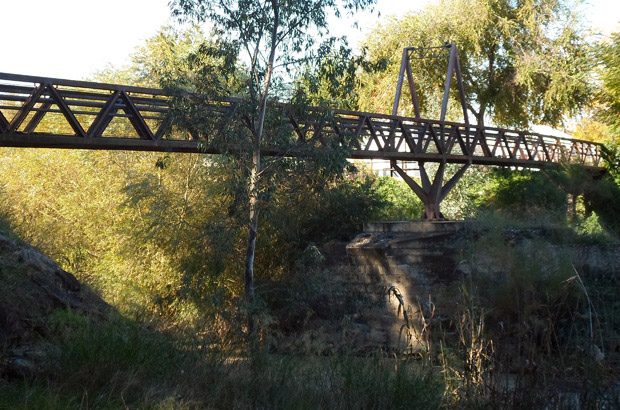 Palma del Rio did not have its first stone bridge above the Genil River until XXth century. This bridge is the largest public construction during the Dictatorship of Primo de Rivera. The bridge was finished on the March 31, 1931.

During the Civil War this bridge suffered numerous damages due to an explosion to halt the enemies advance.

You can observe some remains of the bridge above The Retortillo River on the right bank of the Guadalquivir River. The remains are hidden under growing vegetation. Therefore we also have two other bridges here: the bridge of the secondary road A-431 and, on the other side, the bridge of the railway line from Cordoba to Seville. This area is found on the itinerary of the route A walk throughout The Guadalquivir River.

“El album del viajero por el ferrocarril de Cordoba a Sevilla” (1861) contains illustrations and a full description of this significant service in the development of communication in Palma del Río. The journey between Córdoba and Seville lasts two hours and twenty one minutes.

Currently this service offers its original function and preserves its typical architectural design during the middle of XIXth century.